Difference between revisions of "Bomb Jump"

A Bomb Jump is when Samus gets hit in Morph Ball with a Morph Ball Bomb. Their main purpose is to propel Samus vertically while in Morph Ball. Most variations are rarely used outside of low% runs. 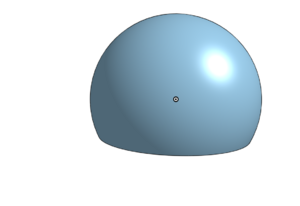 Bombs have a Bomb Counter whose initial value is 3 as well as a Bomb Refill Timer. When a Bomb is laid the counter decreases by 1 and the timer begins to count down from 3 seconds. The bomb that is laid can then be hit anywhere within this figure shown. Note this is slightly smaller than the full size of the bomb. This means Samus cannot get hit if she is too far below a bomb. The radius of this figure is .7 units, with Samus being unable to hit the bomb if she is located half the radius or .35 units below where the bomb was laid. Hitting a bomb gives samus a fixed vertical propulsion of just over 23.5 units. Underwater samus cannot bomb jump very well without the Gravity Suit. She is only giving a very tiny vertical propulsion of 8.7 units which is also quickly diminished because of water physics. While near the surface of water, Samus will "cling" to the water upon entering or exiting as the game switches physics suddenly. This can throw off timings of bomb jumps coming out of water. By laying a bomb and starting the Bomb Refill Timer, Samus can time a Bomb Jump so that the bomb counter refills during the bomb jump. This allows for Bomb Jumps of up to 5 bombs. Being able to continuously refill past 5 bombs is known as Infinite Bomb Jumping.

The blast radius size was changed in corruption. It is now smaller and harder to hit. Additionally this game introduces Spring Ball and is also restricted by the One Bomb in Air Rule.

One Bomb In Air Rule

Starting from the Wii version of Metroid Prime and onwards, an additional rule was added that Samus cannot hit more than 1 bomb in the air a time. This was likely to prevent the player from doing mid-air Bomb Jumps using Spring Ball. One quirk of this is that some rooms such as Hydro Access Tunnel and Waste Disposal turn off this rule to allow the player to progress normally through underwater Morph Ball tunnels.

Unmorphing out of Bomb Jumps

By unmorphing out of a bomb jump at the right moment, Samus can gain extra height. Unmorphing instantly places Samus in her "standing" state, which has different physics from "morphed" state, namely, vertical deceleration is much higher while Samus is morphed. There is a trade-off, however, because Samus' Standing state has a vertical speed limit whereas Morph Ball does not. If Samus unmorphs going faster than this speed limit, her vertical speed will be dragged to this limit. This makes unmmorphing early unfavorably cut off the potential height of a bomb jump. Likewise, unmorphing late means Samus spends more time in the rapid deceleration of morph ball, and won't have much momentum left going into the unmorph. A properly timed unmorph is done the frame before Samus' speed dips below her Standing Vertical Speed-Cap, which is altered by having Space Jump Boots in your inventory. Having Space Jump Boots increases Samus' vertical speed-cap to 14.0, whereas not having them has a speed-cap of 11.667. As a result, some Bomb Jumps are only possible with the extra height Space Jump Boots allows, and mostly all bomb jumps with an unmorph are made easier by having them.