Jumping is a basic mechanic in the Metroid Prime games that allows for Samus to gain an increased amount of height when the B button is pressed. In addition to this basic functionality, jumping is also the basis for which Samus is allowed to perform Combat Dashes or Scan Dashes. By default, Samus is only allowed to jump once after leaving the ground, but this can be increased to 2 by acquiring the Space Jump Boots. The way jumping functions across the three games is largely the same.

The significance of jumping in speedruns is not just due to its basic functionality, but for the way that it interacts with other mechanics.

Jumpstates are a variable that the Prime games use to track whether or not Samus should be allowed to jump at any given moment, as well as dictate whether or not she can use her Dash or Space Jump. Jumpstates are the most important concept to understand when talking about the inner mechanics of how jumping works. Due to the complexity of this game's movement, there are 5 states in total: 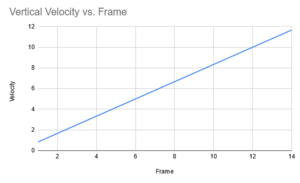 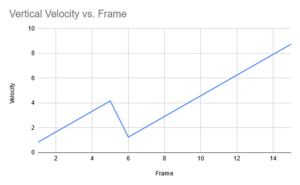 Vertical velocity during jumpstate 1, with a Dash performed on frame 6

Performing a Dash while in jumpstate 1 causes Samus' vertical velocity to sharply decrease for a single frame. How much exactly her velocity decreases depends on when during jumpstate 1 the Dash is performed. However, her velocity will continue to increase afterwards up until the point where jumpstate 1 ends. This is the reason why, when performing Scan Dashes, it is often important that the B button is released as soon as possible. The faster B is released, the less height will be lost as a result. If you release B too late, this can make certain tricks such as Space Jump First more difficult than they otherwise have to be.

Slope Jumping is when Samus rubs along sloped collision while jumping. This can allow Samus to increase or decrease her speed while touching the collision. This can result in higher vertical jumps or to fall faster when unmorphed which is known as a Reverse Slope Jump.

Floaty Jump is when the game applies water physics to Samus' jump while she is in the air, allowing for her to jump far higher than is normally possible. This happens because the game thinks Samus is in the water even though she isn't, resulting in her jumping as if she is in water.

When jumping on the first frame possible, Samus will keep her vertical speed going into the jump. The following conditions are required:

Ledge Clips (often referred to as ledge clip ghettos) occur when the following conditions are met:

As a result of these three conditions being met, Samus will get extra height from the jump compared to normal. This happens because Samus' vertical velocity does get reset to 0 for a frame. Therefore, when Samus jumps on this exact frame, she can start her jump from a higher vertical speed and achieve a higher jump.