A Bomb Space Jump (BSJ) is a technique that allows Samus to get a jump with greater height than a standard jump or Space Jump. It is most often used in situations where standable collision is nearby, but it requires a greater amount of height than is normally possible in order to land on it. BSJs take advantage of two properties:

Technically, the term for Bomb Space Jump should be an Instant Unmorph Jump (or IUJ) because a Bomb Space Jump doesn't actually require Morph Ball Bombs in order to work. One prominent example of this is during Exo Skip when performing the Secret World; optimally this is done with what is sometimes referred to as a Bombless BSJ in order to immediately stand on the door frame.

Bomb Space Jumps have various use cases across all three games. They are generally most common in Metroid Prime 2: Echoes, as there are less instances where standable collision is the basis for climbing large vertical gaps. Generally, they are also similar in mechanics across the three games as well. Metroid Prime 3: Corruption is the most different of the three, in that in addition to the standard BSJ, it is also possible to utilize the Spring Ball as the basis for a BSJ. This also applies to the Trilogy versions of Prime 1 and Echoes.

Graph showing the height Samus gets from a single bomb while in Morph Ball. The yellow portion highlights the frames in which Samus has jumpstate 4. Peak height is 3.409 units.

When Samus is in the Morph Ball and the game detects her to be in the air, the game temporarily sets Samus' jumpstate to jumpstate 4. Jumpstate 4 allows for Samus to jump while in the air for a total of 22 frames. However, since at least 1 frame is required to Instant Unmorph, the amount of frames we can take advantage of is reduced to 21. After these frames have passed, the game sets Samus' jumpstate to jumpstate 2 ("Free-fall") at which point she will no longer be able to jump until she hits the ground again, resetting her jumpstate to 0. It is generally impossible, outside of a few niche cases under TAS conditions, to extend the duration of these frames by fooling the game into giving you jumpstate 0 by rubbing onto collision seams.

Below are descriptions of each type of BSJ one can expect to encounter. Each subsection will reference the optimal height: this is assuming Samus only uses one of her jumps after optimally Instant Unmorphing at the best possible frame, and that she does not have Space Jump. The true height gain from a BSJ will vary depending on how well you perform the jump and the circumstances of the room itself. The higher Samus is when she unmorphs and presses B, the higher the jump will be. 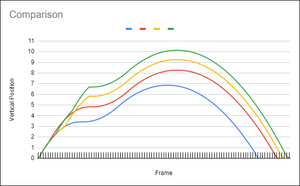 A single BSJ, or 1BSJ, is the simplest form of BSJ. Naturally, there isn't much to it, but getting the optimal height entails performing the Instant Unmorph at around 16 frames in. The optimal height for this type of BSJ is 6.845 units.

3fBSJ stands for 3 frame Bomb Space Jump. It refers to when two bombs are laid in the same place at once in a small amount of time, allowing the Morph Ball to get hit by all two of the bombs as it is first getting off of the ground. It provides more height than a single BSJ, but less height than a 2BSJ. As the name implies, the bombs must not be laid more than 3 frames apart to get the most out of this method, as the bombs will not be able to hit Samus otherwise. The optimal height for this type of BSJ is 8.268 units.

The 2BSJ is less precise and more efficient than the 3fBSJ. The second bomb should ideally be spaced in the middle of jumpstate 4 (around 10-11 frames in) to get the best possible height, but there is a decent amount of room to gain a significant amount of height over a 1BSJ, even if the bomb is placed suboptimally. The optimal height for this type of BSJ is 9.260 units.

The 3BSJ grants players the most height out of any standard BSJ. The setup for this type of BSJ is actually different between games, owing to the changes to the way bombs are programmed between Prime 1 and Echoes.

Naturally, performing a 3BSJ in Echoes is faster than performing a 3BSJ in Prime 1. Likewise, 3BSJs in Prime 1 are the slowest BSJ method. As such, they should only be performed in situations that require it for speedruns. Ideally, the bombs should be laid between 6-7 frames of eachother to get the most height out of this method. The optimal height for this type of BSJ is 10.1329 units.

In Prime 1, it is possible to have more than three active bombs at once. This has limited applications for BSJs in a TAS setting, as by this point the height gained by each individual bomb is starting to have diminishing returns. There is no current use for 4BSJs outside of TAS.

As alluded to before, an Instant Unmorph Jump (or bombless BSJ) is the same thing as a BSJ, but it doesn't use bombs in order to get Samus into jumpstate 4. This can be done as Samus is getting repositioned Out of Bounds such as during the first stages of the Frigate Wallcrawl or Exo Skip, or by rolling Samus in such a way that she gets in the air, like in Central Station Access for certain low% categories.

Examples for Each Game

Bomb Space Jumps are used to differing degrees in each of the three games. This section highlights some notable examples for each game, showcasing various different types of BSJs for different rooms and situations.

Bomb Space Jumps have some significant use cases in Prime 1 speedruns, but as a whole they are not as common as they are in Echoes. They are mostly used for specific tricks where other standable collision cannot be used to climb a room.

In Elevator Access A, the first room for Spiderless Shafts, a 2BSJ is used in order to gain the height necessary for the first standable spot. This is required for the fastest any% routes.

This is an example of an Instant Unmorph Jump in Prime 1, in the room Crater Tunnel B. When the Metroid repositions Samus out of bounds, she has a small window to Instant Unmorph and press B to jump. If successful, Samus will be able to stand on top of the door frame immediately, quickly allowing for the rest of the wallcrawl to be done without falling deep into Phazon Core.

BSJs are very commonly used in Echoes speedruns, having applications in various rooms throughout the game and finding uses in all major categories.

In any% runs, the fastest route involves getting a Secret World while the map is focused on Temple Transport C, and using an IUJ to transition to Transport C Access.

This is an example of an IUJ being used to traverse a room without the Space Jump Boots. Normally in Central Station Access, Samus will not be able to get the height necessary to jump onto the ledge without Space Jump. However, an IUJ can give just enough height to make it onto the ledge. This is done in certain low% categories.

Just like in Echoes, BSJs are also common in this game. BSJs in this game can be combined with Spring Ball. The initial bomb can be a Spring Ball instead. There are two BSJs used in Corruption:

One of the first tricks in Corruption involves using a Spring Ball IUJ to quickly get onto the upper level in Docking Bay Access.