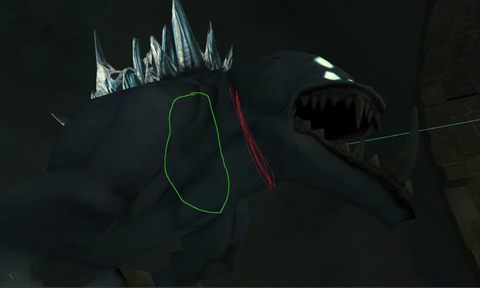 The red on this image marks the Sheegoth's neck, whilst the green circle is what constitutes its weakness point where missiles should be fired.

Sheegoth is a miniboss first fought in the Chapel of the Elders in Phendrana Drifts. It guards the Wave Beam. It can also be found in Ice Ruins East, Ice Ruins West, and Quarantine Cave later on. When fighting Sheegoth before collecting Wave Beam, before the fight starts, it's best to position Samus around the brown square in the front-middle of the room. This will manipulate Sheegoth to run there and bite in the air.

As soon as the fight begins, walk forwards a bit then morph and roll close to its left side. Luring it to attack is more important than getting up to it as fast as you can, otherwise you waste time waiting for Sheegoth to turn. When it starts its ice breathing attack, quickly lay 3 bombs under its head and near its foot and then unmorph. If done right, it will interrupt its attack and start coughing. Now Sheegoth will receive triple damage for each missile you fire at its head until it recovers. If done correctly it can be finished in one round. If it isn't dead after one round, then repeat the process or fire missiles, depending on your ammo count.